On behalf of our client Vietjet, we are delighted to share the budget carrier’s business updates on its impressive growth in 2018 from its international routes.

In Vietjet’s 2018 audited financial statement, the budget airline announced positive business results with VND 53.6 trillion (USD 2.3 billion) in revenue and VND 5.8 million (USD 252.9 million) in pre-tax profit. Despite a 30 per cent increase in oil prices, the company’s revenue and pre-tax profit from aviation transport hit VND 33.8 trillion (USD 1.47 billion) and VND 3.05 trillion (USD 132.4 million) respectively – an increase of 49.8 and 48.9 per cent year-on-year. It is significant to note that Vietjet’s record growth of 2018 came mostly from its core aviation transport business. 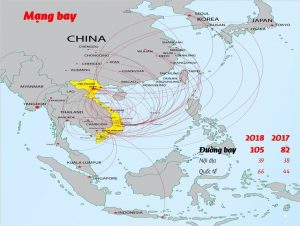 Vietjet and national flag carrier Vietnam Airlines hold the majority of domestic market share in Vietnam. Vietjet has achieved nearly 20 per cent in revenue growth from aviation transport in the domestic market and continues to hold a strong position in passenger volumes for domestic routes.

According to Vietjet and the Civil Aviation Authority of Vietnam, Vietjet operated 118,923 flights in the year of 2018, out of which 34,990 were to international destinations – a 56 per cent increase from 2017. These numbers far surpassed competitors in the domestic market and also exceeded Vietnam’s aviation industry’s average growth rate of 9 per cent.

Having effective cost management has bolstered Vietjet’s competitive capacity in the international market. Direct operating costs (excluding fuel costs in terms of Cost per Available Seat Kilometre, CASK) went down by 0.1 per cent to 2.38 US cents thanks to Vietjet’s modern fleet and cost-saving measures, alongside fuel cost optimisation support from the aircrafts’ engine manufacturer.

The average CASK rose by four to five per cent in 2018 (Source: IATA), allowing Vietjet to boost profit on international routes that accounted for more than 60 per cent of the company’s total aviation transport profit last year. 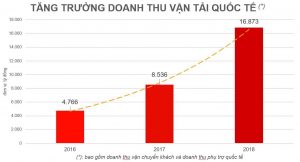 Other than providing a range of options in flight schedules, Vietjet is also tapping into the higher-income customer segment with an array of priority services.

Building from its strong performance in the domestic market, Vietjet aims to further expand its international route networks to exploit lower fuel costs. The airline has been launching flights to developed nations in the North-eastern region in Asia to reach a higher proportion of foreign currency income from higher income international customers.

Do kindly let us know if you would be keen to feature Vietjet as a focused story, and if there is any additional information we can provide you that would be helpful. Looking forward to hearing from you!