From April 9 to 11, the foreign press tour “2019 Amazing Hainan” was held by the Publicity Department of CPC Hainan Provincial Committee in Hainan province. It was attended by journalists from eight major presses of the world, including European Pressphoto Agency, Agencia Lusa and Tokyo Shimbun. They visited Haikou, Chengmai, Qionghai, Lingshui, Sanya and Baoting, and acclaimed that “Hainan boasts bountiful tourism resources, and rapid growing Internet industry. The achievements of the FTZ are beyond imagination.” 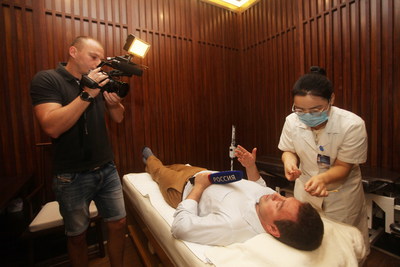 A journalist from All-Russia State Television and Radio Broadcasting Company experiencing the acupuncture therapy and sharing his feelings to the camera.

The Fuxing City International Offshore Innovation Building in Haikou has attracted many well-known enterprises such as Alibaba, Ant Financial Services Group and PwC, as well as many foreign “makers”. Hainan Ecological Software Park is in Chengmai, which is home to more than 3,600 Internet companies, including some projects worth RMB 10 billion, such as Tencent Internet Village, China Game Cyberport Project and China Mind Sports Industrial Base Project. The cutting-edge technologies and the prospects have deeply impressed the group.

Joao Pimenta from Agencia Lusa said that Hainan used to be known for tourism. Now, as the free trade one has been established, many R&D teams from the hi-tech industries start to settle in Hainan. Hainan has been promoting tax reduction, and he believes that the favorable policy will attract more foreign investment.

Alexander Balitskiy from VGTRK took a great interest in traditional Chinese medicine. In the Boao TCM hospital, he shared his experience in acupuncture during the therapy. “It is amazing! We need to have more people to learn about TCM!” In the Binglanggu — Hainan Li & Miao Cultural Heritage Park, many journalists were attracted by the traditional Li textile technique, which includes spinning, dyeing, weaving and embroidering and is on the List of Intangible Cultural Heritage in Need of Urgent Safeguarding of UNESCO.

Apart from medical tourism, sports tourism, folk culture tourism, and duty-free tourism, Hainan is working to be more innovative in tourism. The journalists were also impressed by Atlantis Sanya and the Paddy Field National Park, underwater suites and many other upscale tourism products, and the integrated program of agriculture and tourism “expansive paddy field + large-scale artificial dinosaurs park”. They believe that the rich and intriguing tourism programs will bring endless potential to the future development of the tourism in Hainan FTZ.