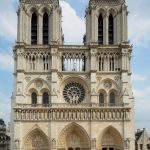 What seemed a disaster for Paris yesterday, a fire that gutted the city’s iconic Notre Dame Cathedral, has been transformed into an inspiration – with a pledge to rebuild the cathedral, a breathtakingly generous gesture by a man with travel industry connections, and a splendid example elsewhere in Europe of how brilliantly cathedral restoration can be done.

French President Emmanuel Macron has pledged to rebuild Notre Dame and is raising donations to do so.

Within hours of the fire, renowned French billionaire François-Henri Pinault, chairman of the Kering Group and Artemis – the holding company that controls the assets of the Pinault family (which includes the French-flagged luxury cruise company PONANT as well as brands Gucci, Yves St Laurent and Alexander McQueen) – pledged 100 million Euros towards the rebuild.

Coming from family funds, Pinault’s offer is a most extraordinary gesture. EUR 100 million is about AUD 158 million.

Others have stepped forward and made their own donations.

As for the example elsewhere in Europe of how a cathedral can be excellently restored; you need go no further than Dresden, Germany, where the city’s cathedral been brilliantly rebuilt and recreated after sustaining massive damage in World War II.

News of yesterday’s fire in Notre Dame, one of Europe’s great medieval cathedrals and best-known landmarks, brought tears to the eyes of Parisians and many others around the world.

It could have been worse, however.

As the flames were brought under control, a tweet of hope went out: Inside #NotreDame. Only a small part of the vault collapsed. Interior seems relatively untouched. Alleluia! #NotreDame #Paris

There’s a big hole in the 850-year-old cathedral’s roof, but the altar and its cross were preserved, seemingly miraculously. The spire fell, but the bronze statues of the Twelve Apostles had already been removed from it for restoration, so were safely locked away in southwestern France. Notre Dame’s grand 18th-century cathedral organ, largest in Europe with 8000 pipes, has also escaped, largely intact.

Incredible picture in the aftermath of the Notre Dame Cathedral fire with the Cross still intact… #NotreDameCathedral pic.twitter.com/XsTaJwVl8S

Notre Dame is a UNESCO world heritage site (since 1991) and one of Paris’s most popular tourist sites. Few first-time visitors to Paris leave without seeing or visiting it.

President Macron, speaking from the scene of the fire, said the conflagration had been a “terrible tragedy,” but the “worst had been avoided”.

I took this after we were evacuated from Île de la Cité, seconds after the spire of #NotreDame fell to the flames. An entire city in mourning pic.twitter.com/z3l0vtbVTk

“I’m telling you all tonight – we will rebuild this cathedral together. This is probably part of the French destiny,” he said.

“Starting tomorrow, a national donation scheme will be started that will extend beyond our borders.”

François-Henri Pinault of PONANT was quick to respond, with his amazingly generous donation.

The fire broke out Monday evening (French time) and burned fiercely for several hours before 400 firefighters brought it under control. The spire burned and toppled, but the great towers stood firm.

“Notre Dame is our history, it’s our literature, it’s our imagery. It’s the place where we live our greatest moments, from wars to pandemics to liberations,” Macron said.

“This history is ours. And it burns. It burns and I know the sadness so many of our fellow French feel.”

Macron said the cathedral would be rebuilt “within five years”.

Great artworks inside were saved, as was the Holy Crown, believed by many to be from the crown of thorns placed on the head of Jesus. The fabulous rose window, of stained glass, was also spared.

The photo of the rose window below was taken and posted on Facebook by a visiting Australian tourist, Pater Watters, just hours before the fire. 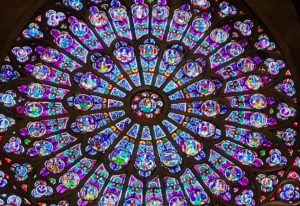 It was not immediately known what caused the fire. It’s thought to have been accidental. Construction connected with restoration work is suspected.

MEANWHILE, an inspiring example of what can be achieved through cathedral restoration is provided elsewhere in Europe, in the wonderful city of Dresden. The city sustained appalling damage in massive bombing raids in 1945, the final year of World War II.

I visited Dresden for the first time last year and was very impressed at what a great city it is, and how magnificent many of the restored buildings look. 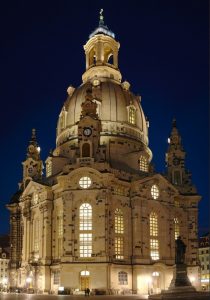 Inspiration in Dresden, Germany. Frauenkirche (Church of Our Lady), opened in 2005 in Dresden, superbly reconstructed after its destruction during World War II. The work took 11 years to complete.

Frauenkirche (Church of Our Lady, Dresden’s great cathedral) was destroyed in the bombing of Dresden. The remaining ruins were left for 50 years as a war memorial.

Then, after the reunification of Germany, Dresden’s cathedral was rebuilt, starting in 1994. The reconstruction of its exterior was completed in 2004, and the interior in 2005. As shown above, it looks superb. 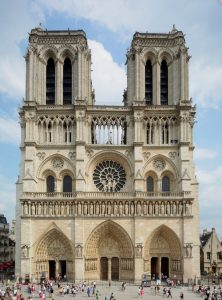 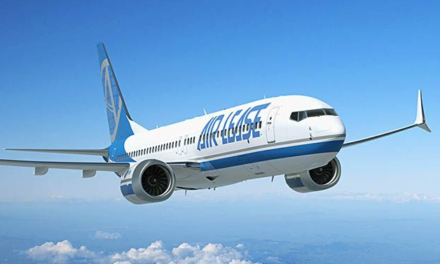