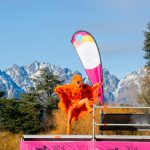 The 45th Real Journeys Queenstown Winter Festival programme has been revealed and is a birthday bash packed with everything the Festival has become legendary for – buzzing downtown streets, fireworks, live music and comedy, and madcap antics in the snow and icy water of Lake Wakatipu, announced Festival Director Rae Baker at the official Festival launch on the steamship TSS Earnslaw earlier this evening (15 April 2019).

“The Real Journeys Queenstown Winter Festival is all about celebrating the start of winter in New Zealand’s premiere winter destination,” says Ms Baker.

“The four-day Festival celebrates and showcases our unique and beautiful wintery region as only Queenstown and the people who live and visit here could.”

The Festival programme, which runs from 20-23 June 2019, goes live on www.winterfestival.co.nz at 9am tomorrow (Tuesday, 16 April 2019), with ticketed events on sale immediately – many of which are expected to sell out within the first week.

Launching New Zealand’s snow and ski season in inimitable style since 1975, the programme for the Real Journeys Queenstown Winter Festival’s 45th birthday shows the Festival has no intention of aging gracefully according to Ms Baker.

“The Festival’s most loved events, like best friends and eccentric rellies, are in town for the party and some come with an unexpected twist in 2019,” said Ms Baker.

The Monteith’s Dog Derby will be run for the 45th time. MoreFM Day on the Bay features AJ Hackett Birdman – but not as you know it, Vincent Holdings Jet Sprints, the Jucy Undy 500 and Go Orange are bringing back the Splash for Cash – reimagined.

The Festival celebrates the start of winter and falls within Matariki, the Maori New Year. Proceedings begin with manuhiri (guests, local and from afar) being guided through Queenstown’s beautiful streets in the Matariki Torchlight Hikoi.

“Creating a beautiful sea of fire torches, our manuhiri will be met by representatives of the multiple iwi that watch over Tahuna Queenstown and welcomed into our place with a spectacular Waka Ama and Mau Rakau demonstration,” said Ms Baker.

“This allows our manuhiri to be welcomed and accepted into our winter celebrations before a Ngai Tahu led mihi whakatau (welcome ceremony) precedes unmissable performances by the legendary Trinity Roots and Ladi6.”

It’s a mountain festival and Queenstowners and visitors are spoilt for choice when it comes to ski resorts. Cardrona Alpine Resort once again hosts the Monteith’s Dog Derby and Dog Barking and the antics at the Mountain Festival Village – the Winter Fest Suitcase Race, Snow Tubing, and a ‘70’s event flashback, the Tug O War on Skis. The Tour de Cardies and Macpac Mountain Bikes on Snow, ironically cancelled due to too much snow in 2018, are highly anticipated by local adrenalin chasers.

Festival nights are a feast of choices, from comedy, to live music and the annual glamfest, the Skycity Ball. Once again, the final location will be kept a secret until the very last minute, but it has been revealed that the theme for 2019 is the ultimate in decadent disco, Studio 54.

The Festival mainstage has always hosted the best of New Zealand’s musical talent and 2019 sees four packed days and nights of local acts and national headliners, most of which are free gigs.

“Backed by a hefty family of local and national sponsors and firing on all cylinders after two years of format and creative changes, from mountain top to lake shore, the 2019 Real Journeys Queenstown Winter Festival 45th anniversary bash will be one to remember,” said Ms Baker.

The 45th Real Journey’s Queenstown Winter Festival programme, which runs from 20-23 June 2019, goes live on www.winterfestival.co.nz at 9am, Tuesday, 16 April 2019, with ticketed events on sale immediately.

Event individual and team sign-ups are open from 9am, Tuesday, 16 April on www.winterfestival.co.nz and some events have limited numbers.

The Bubbles Festival – a Celebration of Sparkling Wine – Is Back in 2020 and This Time It’s Going National Kicking Off in Sydney on 3 and 4 April!