A naked passenger has been detained by airport security after striding onto an airport tarmac to board a flight – just a day after police arrested another naked man waiting in a check-in queue at a different airport.

The latest arrest was made at Chicago O’Hare International Airport yesterday, after a man walked onto the tarmac completely naked.

The tweet below, shared by ORD Airport Insider, said the naked passenger was seen at gate C10 at Chicago O’Hare’s Terminal 1 after attempting to board a Delta flight. 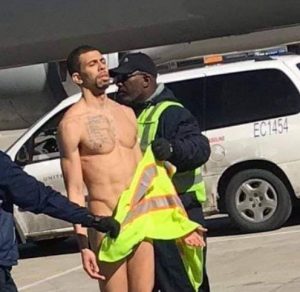 A day earlier, video footage of a man queuing quietly with passengers at an airport check-in desk went viral – mainly because, although the other passengers are dressed warmly, the man was stark naked.

In both cases, other passengers seem to have taken the situation quietly and waited for authorities to intervene and clothe the naked travellers.