Rising teenage star Huang Ting-hsuan was crowned queen of the 2019 ANNIKA Invitational at Mission Hills in China following a final-round 71 for a two-shot victory over defending champion Nanako Inagaki. 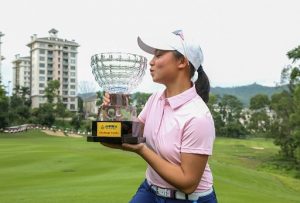 The 14-year-old Huang from Taoyuan City in Chinese Taipei received the trophy from tournament host Annika Sorenstam. As a further reward for her success, Huang has been granted exemptions into two professional events, the EFG Hong Kong Ladies Open at the Hong Kong Golf Club (May 10-12) and the China LPGA’s Zhangjiagang Shuangshan Challenge (June 6-8).

Huang held the overnight lead thanks to a stunning 64 in round two and maintained her nerve with a closing one-under-par 71 to finish on 12-under 204.

As the top three finishers overall, Huang, Inagaki and Yin have earned exemptions into the 2020 ANNIKA Invitational USA presented by Rolex at the World Golf Village in St Augustine, Florida.

“I was really nervous, especially on the last three holes with Annika watching. But I’m so happy now,” said Huang, who was playing in her third ANNIKA Invitational at Mission Hills and won her age group in last year’s IMG Junior World Championship.

More than 80 girls from eight countries and territories competed over 54 holes of stroke play on the par-72 Annika Course.

The first all-girls international event in China, the ANNIKA Invitational at Mission Hills was launched in 2011. Since its inception, the event has hosted over 1,000 players, many of whom have gone on to play Division I collegiate golf in the United States and several have succeeded at the professional level.

The ANNIKA Invitational is a highlight of the Mission Hills Junior Golf Programme, which provides access to golf for tens of thousands of juniors each year – from beginners through to elite amateurs – through more than 50 junior tournaments, coaching, camps and clinics, a schools’ initiative, a golf scholarship programme with The R&A, free access for juniors to three of its courses, and free entry into the Dr David Chu Golf Museum at Mission Hills.

Since 2005, Mission Hills has invested more than US$6 million into its junior programme and more than 100,000 competitive rounds have been played by juniors at Mission Hills.

‘Living Golf’ Returns to CNN with Golf Saudi as Sponsor