Princess Cruises, the world’s largest international premium cruise line, announced today that MedallionNet– The Best Wi-Fi at Sea, will be available onboard Australian homeported Golden Princess from 20 December 2019 during the line’s 2019/2020 summer season. 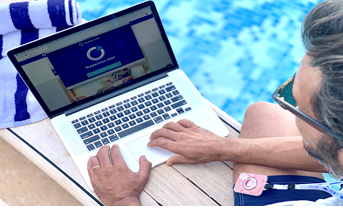 Cruising out of Melbourne, guests onboard Golden Princess will be the first to enjoy the benefits of fast, reliable, and unlimited internet service locally as they sail on itineraries to New Zealand, South Australia and the South Pacific.

“We’re delighted to announce that Golden Princess will be the first Australian-based ship to feature MedallionNet –  the fastest internet at sea.” Said Princess Cruises Sales and Marketing Director, Nick Ferguson.

“Guests sailing on itineraries out of Melbourne over the 2019/2020 season will be able enjoy access to the internet at speeds that equal or exceed what they experience on land. We know travel agents will also be excited by the local rollout of this upgraded technology – making it exceptionally easy for guests to share photos, videos and messages during their holiday.”

Australian guests eager to experience MedallionNet before it reaches Australian shores can book fly-cruise itineraries onboard the recently activated Ruby Princess sailing Alaska or Regal Princess sailing the Baltic before each ship makes their respective maiden Australian arrivals in 2019 and 2020. The 113,000-tonne, 3084-guest Ruby Princess will arrive in AustraliaMedallionNet ready on 23 October 2019 – sailing alongside Majestic Princess for line’s biggest Australian season in history.  A year later, Regal Princess will form part of Sydney’s record season by calling the region home from 2 December 2020 and marking the first time in history that Princess Cruises has deployed two Royal-Class ships from the same homeport outside the Caribbean.

This year, over half the Princess fleet will be MedallionNet enabled, expanding to a further five ships;  Coral Princess (April 5) and Island Princess (May 15) in time for the Alaska season,Crown Princess (June 30) and Emerald Princess (August 3) for sailings through Europe and on Sky Princess (October 12). MedallionNet is also currently available on Caribbean Princessand Royal Princess.

Viking opens its most popular ocean cruises for 2023/4 bookings