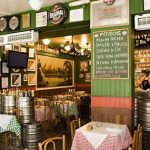 Those who think that only Rio’s beautiful beaches are packed in the summer couldn’t be more wrong. With temperature around 41ºC in January, the country’s second largest metropolis is a draft beer consumption champion. The average here is two times higher than that registered in other capitals of the country. And a true carioca doesn’t go home after working hours, at sundown. Sitting at one of the thousands of bars in the city and sipping a cold beer is almost a religion. Close to the beach, with or without a view of the sea, modern or old, the options are many. Check out some of the most popular points:

:: MURETA DA URCA – It is one of the busiest places in the end of the afternoon, especially on Saturdays and Sundays. The stunning view, which includes the sunset framed by the Christ the Redeemer and the Botafogo Cove, is a gift. Locals and tourists are scattered in three different points. The first, right at the beginning, on the corners of Avenida Portugal and Ramon Franco Street. Following the wall, you’ll find the second point, at Urca beach. The most popular is Bar Urca, which serves beer and pastéis to customers sitting on the wall. 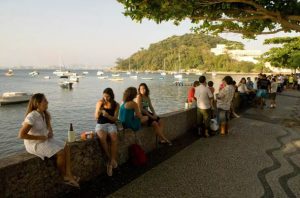 : ARCO DO TELES – When the clock strikes 5pm, the dozens of bars at Arco do Teles and surrounding streets start to get full. The area, part of the history of Rio, is located between Praça XV and Candelária Church, in the City Center, near cultural centers and offices. The customers are usually people who have just left work and want to hang out before going back home. There are options for all tastes, usually accompanied by busy rodas de samba. 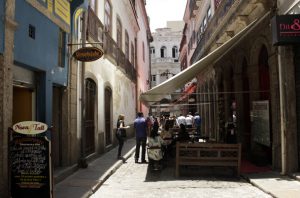 :: BAIXO GÁVEA – Having a draft beer and eating some barbecued sausage is perhaps the best option at Baixo Gávea, located at Praça Santos Dumont, in the Southern Zone of the city. The place is packed on Mondays, when dozens of people crowd the streets. Most of them just stand on the sidewalks and hold their glasses. If you’re lucky enough, then you may find a table available in one of the traditional bars, such as Braseiro and Hipódromo. 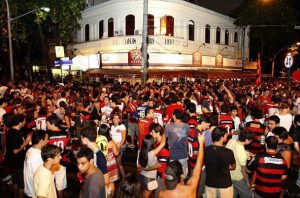 :: CANASTRA – On Tuesdays, a crowd takes the sidewalks and the asphalt of Rua Jangadeiros, in Ipanema. The fresh oysters are one of the attractions for the customers, usually aged 30+, who go there to chat among friends and flirt. The public became fond of this space with the looks of a small, low-cost bar, with tables placed on the sidewalks and cheap national wines. 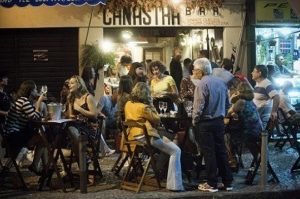 :: VOLUNTÁRIOS DA PÁTRIA – If you take the Rua Voluntários da Pátria exit when leaving the Botafogo subway station, you will find dozens of crowded bars, tables geometrically arranged on the sidewalks and the buzz of hundreds of customers. The space is democratic and includes all tribes. From young to old, skaters, LGBTs, rockers and people who love the good old bohemia. 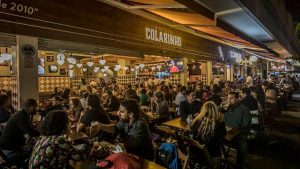 :: PAVÃO AZUL – The bar, located at Rua Hilário de Gouveia, in Copacabana, is one of the most traditional points. It has grown, beyond the original store, and occupies different spots on the same block, all packed in happy hours. The recipe includes ice-cold beer and tasty snacks. It is always crowded, and the public is democratic. 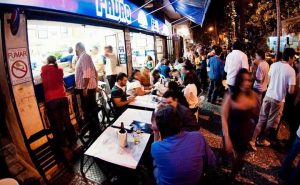 :: LEBLON – The options are not few and the list includes popular and sophisticated bars. At Rua Dias Ferreira, locals and tourists will find more than 10 bars and restaurants with varied menu. It is one of the busiest points in this neighborhood, in the Southern Zone of the city. Not far away are two other very traditional options: Jobi and Bracarense, ideal to sit down, sip a draft beer and meet good-looking people.

JOHN ROZENTALS reports on a new development for Yalumba with some of its oldest vines. 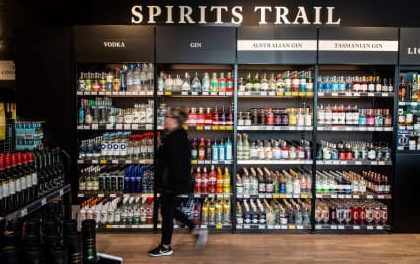