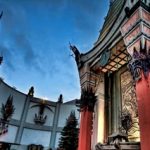 The 91st Annual Academy Awards are taking place on February 24, 2019 at the Dolby Theatre in Hollywood, the permanent home of the ceremonies since 2002. The ceremony is being broadcast to a global audience that spans more than 200 countries. The Oscars recognise the previous year’s greatest cinematic achievements, as determined by some of the world’s most accomplished motion picture artists and professionals. Awards are presented by the Academy of Motion Picture Arts and Sciences (AMPAS) for outstanding individual or collective efforts in up to 25 categories. The first Academy Awards ceremony was held at the Hollywood Roosevelt Hotel in 1929, and since then the Oscars have has taken place at some of L.A.’s most famous and historic hotels and theatres.

The first Academy Awards honoured the best films of 1927 and 1928 and were presented at a private dinner on May 16, 1929 at the Hollywood Roosevelt Hotel. Named for President Theodore Roosevelt, the hotel opened in 1927 and was financed by a group that included Douglas Fairbanks, Mary Pickford and Sid Grauman. The ceremony was held in the hotel’s Blossom Ballroom, where 270 guests each paid USD $5 per ticket to attend the dinner and watch the presentation. Winners were announced three months before the ceremony, which was not broadcast on radio or television. The event was hosted by Academy president Douglas Fairbanks, who presented all of the golden statuettes in 15 minutes.

Between 1930 and 1943, the Academy Awards alternated between the historic Millennium Biltmore Hotel in Downtown, and the now-demolished Ambassador Hotel, where the second Oscar ceremony took place inside the famed Cocoanut Grove nightclub. At the time of its grand opening in 1923, the Biltmore was the largest hotel west of Chicago. During the Academy’s early years, the Biltmore Bowl at the Millennium Biltmore was the site of eight Oscar ceremonies: 1931, 1935–39, and 1941-42. Today the Biltmore Bowl blends period details and the hotel’s interior design with state-of-the-art audiovisual equipment, a pre-function foyer, a curtained stage and a long balcony that’s perfect for lavish buffets.

The Academy was founded in 1927 at a luncheon banquet in the Biltmore’s Crystal Ballroom, where guests such as Louis B. Mayer discussed plans for the new organisation, as well as a special event to present film-industry achievement awards, an event that became the Oscars. According to legend, MGM art director Cedric Gibbons, who was also at the luncheon, sketched the design for the Oscar statue on a linen Biltmore napkin. The Crystal Ballroom features a hand-painted 30-foot ceiling, carved columns and Austrian-crystal chandeliers. The second-story balconies that surround the ballroom offer a wonderful vantage point to take in everything that’s happening below. 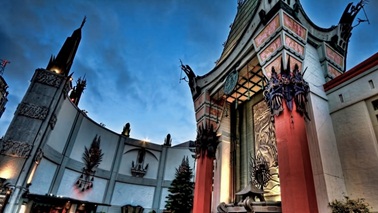 The 16th Academy Awards took place in 1944 at Grauman’s Chinese Theatre (now known as TCL Chinese Theatre) in Hollywood, the first time the ceremony was held in a large public venue. The TCL Chinese Theatre opened in 1927 with a memorable Chinese design and the famous Forecourt to the Stars, which now has nearly 200 celebrity handprints, footprints and autographs immortalised in the concrete. Free passes to the 1944 ceremony were given out to men and women in uniform. For the first time, winners in the Best Supporting Actor and Actress categories were presented with full-size statuettes, instead of smaller-sized awards mounted on a plaque. Casablanca won Best Picture that year, which would be the last time until 2009 that there were 10 nominees in the Best Picture category. The TCL also hosted the Oscars in 1945 and 1946.

The Oscars moved back Downtown for the 19th Academy Awards, which took place in 1947 at the Shrine Auditorium. At the time of its opening in 1926, the Shrine featured a unique Moorish Revival design, the largest proscenium stage in North America, a 3,000-seat freestanding balcony and an adjoining expo hall. The Shrine would also host the 20th Oscars ceremony in 1948. Movie fans will recognise the Shrine stage from the 1933 film King Kong, in the classic scene where the captive ape is revealed to the public.

In 1949, the Oscars were held for the only time at the Academy Award Theatre. According to the Academy’s website, the ceremony was moved from the Shrine Auditorium to the Academy’s own theatre “primarily because the major Hollywood studios had withdrawn their financial support in order to address rumours that they had been trying to influence voters.”

The 21st Academy Awards featured a number of firsts. Hamlet became the first non-Hollywood production to win Best Picture, and Hamlet director and star Laurence Olivier became the first person to direct himself in an Oscar-winning performance. John Huston (Best Director, The Treasure of the Sierra Madre) directed two Oscar-winning performances in the same year for two different films: his father Walter Huston in The Treasure of the Sierra Madre, and Claire Trevor for Key Largo. Jane Wyman became the first actor since the silent era to win an Oscar for a performance with no lines. It was also the debut of the award for Best Costume Design. 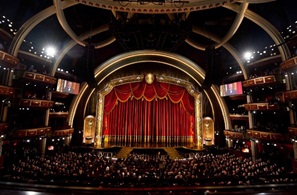 In 1969, the Oscars returned to Downtown for the 41st Academy Awards, which were held at the Dorothy Chandler Pavilion. Opened in 1964, the Pavilion boasts one of the largest stages in the country and is home to the Los Angeles Opera and Glorya Kaufman Presents Dance at the Music Centre. The 41st Academy Awards were the first Oscar ceremony to be broadcast worldwide. Oliver! became the first and only G-rated film to win Best Picture, and Stanley Kubrick would win his only Oscar, Best Visual Effects for 2001: A Space Odyssey. That year was the only time there was a tie in the Best Actress category: Katharine Hepburn for The Lion in Winter, and Barbra Streisand for Funny Girl class, packages available.

From 1988 to 2001, the Academy Awards alternated between the Dorothy Chandler Pavilion and the Shrine Auditorium, which hosted the ceremony eight times between 1988 and 2001. The 70th Academy Awards took place at the Shrine Auditorium in 1998, the year that Titanic won 11 Oscars, including Best Picture and James Cameron for Best Director. The popularity of Titanic, which was the No. 1 movie in the country when the ceremony took place, helped the 70th Academy Awards become the highest-rated broadcast in Oscar’s history.

When The Golden Gate Of San Francisco Opens Once Again