Remember when low-cost carriers seemed likely to bite into the market share of established airlines and aggressive foreign operators on Australian routes were encroaching on the share held by Qantas? New figures stand all that on its head.

The latest report on international airline activity in Australia shows that year on year, Qantas increased its market share, the share of Singapore Airlines and Emirates decreased and Air New Zealand stayed the same.

The report, compiled by Australia’s Bureau of Infrastructure, Transport, and Regional Economics (BITRE), covers the month of October 2018 and compares it with the previous October.

Some of the market shifts are marginal but the overall picture is a far cry from what was predicted a decade ago. Moreover, the share enjoyed by low-cost carriers (AirAsia X, Cebu Pacific Air, Indonesia AirAsia, Jetstar, Jetstar Asia and Scoot Tigerair) fell by almost 2% in the year ending 31 October 2018.

In terms of passenger carriage, Qantas Airways had the largest share of the market in October 2018 with 17.8% of the total followed by Jetstar with 8.7%, Singapore Airlines with 8.2%, Emirates with 7.3% and Air New Zealand with 6.9%. 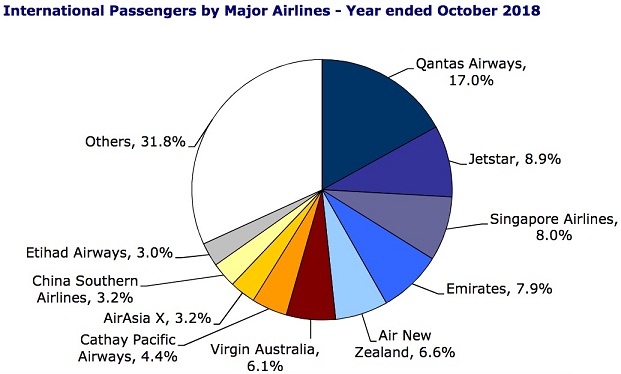 Total seats made available on international scheduled operations to/from Australia during October 2018 were 4.534 million – an increase of 3.8% compared to October 2017. The overall seat utilisation percentage (load factor) grew from 79.7% in October 2017 to 80.3% in October 2018. The totals include AirAsia X, China Airlines, Emirates, Qantas and Singapore Airlines passengers travelling through Australian ports.

JOHN ROZENTALS enjoys the fruits of the Sarks brothers’ labour on the outskirts of the NSW coastal city of Port Macquarie.